An Introduction to Old Toronto

It features some of the densest development in the city, owing in part to its age and the fact that it sits right next to Lake Ontario. For those who want to live or work here, the only options are to build denser or do with less space. This is why Old Toronto is home to some of the most valuable commercial real estate in the country. That’s understandable since it includes downtown Toronto, the core of the city and municipality of Toronto.

The Reinvention of Old Toronto

The many historic buildings are periodically redeveloped due to demand. One frequent example is seen when factories and warehouses are converted into lofts. Demand for housing has led to industrial buildings being converted to apartments and condominiums. Ironically, this attempt to meet housing demand creates a crunch for industrial and commercial real estate in Old Toronto. Infill land for high-rise condo development commands a premium, since there are so few lots that can be turned into condo towers. Anything with a view of the water is worth a fortune. There are relatively few single family homes or townhomes in Old Toronto, but any two and three story buildings that are sold will be snapped up as land for midrise condo development if it can be zoned for such.

The State of Commercial Real Estate in Old Toronto

The value of commercial real estate is only going to rise because the city passed guidelines to limit infill development. Their intent was to preserve the character of these historic neighborhoods instead of letting more old buildings be torn down to build the high-rise commercial and residential real estate that helps the third densely populated region in North America fit everyone in the same geographic area. This is creating interesting results as the facades of old buildings are retained, sometimes extended, as the buildings are made taller or the historic structure expanded to cover more area.

This parallels the general “Manhattanization” of Toronto’s skyline. There are ten projects in the works right now with towers between 240 and 300 metres tall. Three of these new projects would surpass the current record holder, First Canadian Place. The 95-storey structure being built by developer Pinnacle International will be around 303 metres tall. This will give Toronto three “supertall” buildings. All of these projects will contribute to the growing north-south axis of the city’s downtown culture, while the city itself expands along the lakeshore east and west. The incredibly tall buildings sprouting up in downtown provide both commercial and residential space, but it isn’t going to eliminate the demand for more of both in the rest of Old Toronto. Nor will it prevent locals from trying to prevent further urbanization in their area, though groups are seeking to meet demand by increasing the options of mid-rise condo projects along the avenues. 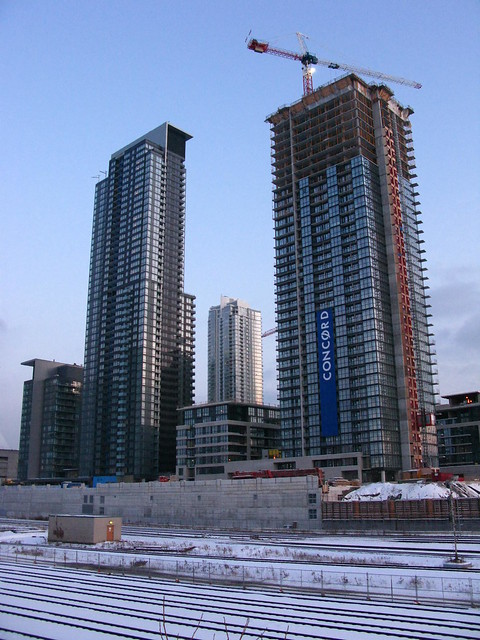 A side effect of the mandates for better community consultation will be more roadblocks for any potential redevelopment or infill project. This is certain to increase the value of lots on which dense residential or commercial construction is allowed. The limited supply of commercial real estate will increase the value of any storefront or office building in Old Toronto, as well. Don’t expect demand for commercial real estate to cool any time soon, since it is driven by tight supply and a record low unemployment rate.

While construction of new office towers is occurring across Toronto, businesses pay a premium to be close to customers, public transit and their employees. This will keep commercial real estate prices for downtown Toronto strong even as the city continues to expand outward. The same pressures are driving infill development of downtown and inner ring suburban residential real estate. People simply cannot afford to live an hour and a half from downtown and commute to work. They’ll pay more to live in denser developments close to amenities. And businesses will pay more in rent to be here, too, as the number of customers in these areas grows.

Why shouldn’t a department store or factory sell out, providing one of the few large lots that could be turned into a condo or office building? This explains why reports say that in 2019, Canada’s availability of industrial real estate was plummeting. Yet demand for food distribution, warehousing and ecommerce is increasing demand for exactly this type of real estate. With vacancy rates hovering near 1%, they compete for space because there isn’t anything else they can do. In summary, while real estate prices are expected to rise around four percent despite regulatory changes intended to cool the housing market, commercial rents and real estate prices can be expected to increase at least that fast. Commercial properties close to public transit, highways and ready access to customers will appreciate even faster.

There’s another factor that will keep commercial real estate in Old Toronto strong relative to downtown real estate in cities like New York. Toronto never experienced the “white flight” or flight of middle and upper class residents to the suburbs that many U.S. cities experienced since the 1950s and 1960s. While many people in the U.S. commute to downtown to work, they leave to go home in the suburbs. Toronto’s vibrant community creates demand for retail outlets catering to people who both live and work here.

Nor did Toronto make the short-sighted mistake of cutting downtown communities off from the rest of the city by sending a highway through the middle of it. The walkable neighborhoods are connected to each other by good public transit. While they may be strained to meet the needs of many new residents and job opportunities, there is a vibrant life at sidewalk level that both attracts people and sustains local businesses. In fact, the development of new towers is only going to add to the energy and profitability of sleepy business districts in Old Toronto.

“Guidelines for Residential Infill Development in Toronto Approved by Council”; SVN Architects + Planners, November 27, 2017
“For Residential Infill Construction: The Good Neighbour Guide”; City of Toronto website, April 9, 2019
“The Missing Middle Guidelines”; Housing Matters, Mar 4, 2018
“Toronto’s skyline is about to join the big-leagues: What the city could look like in 2020”; Toronto Star, Oct. 8, 2016
“Canada’s commercial property market is set for another blockbuster year”; Bloomberg News/Financial Post, January 15, 2019
“It’s not just condos — Toronto is also running out of commercial real estate”; The Financial Post, July 17, 2018
“Toronto’s booming tech scene is squeezing its existing supply of office space, and there is little relief in sight”; The Financial Post, January 26, 2018
“Record low downtown vacancy rates pushing businesses to move to the suburbs, but they are not complaining”; The Financial Post, April 23, 2018