The best investment opportunities are rarely the “hot” markets. Instead, it is the up and coming areas that you want to invest in before they become the next big thing. For those who already live there, knowing that their commercial real estate market is going to take off gives them the knowledge they need to buy or build property before prices skyrocket. The next major real estate investment opportunities are to be found in Bradford, Ontario.

An Overview of the Bradford, Ontario Real Estate Market

Bradford is a small rural town on the edge of the Toronto metro area. It is already home to around 30,000 people. The town expects to see steady growth, both from people who commute to Toronto and who plan on living and working in the Bradford area. Businesses are increasingly relocating to the outer suburbs of Toronto and setting up shop in towns like Bradford, because they can build new facilities to their liking while remaining close to their customers. And it is all due to the great transportation network already in place in Bradford. Though well connected to Toronto via GO Rail, planning priority is on creating a “complete community” in Bradford.

Bradford’s County Road 88 intersects with Highway 400 that connects to Toronto to the south. Residents can take one of several buses into Toronto, as well. Commercial real estate along the major thoroughfares like Highway 400 is booming, because you can find hundred acre sites ready for new commercial buildings and warehouses for a fraction of the price of redeveloped property in downtown Toronto. It certainly helps that the area is also serviced by several rail lines and is a 45 minute drive from Pearson International Airport.

The residential real estate market is stable and growing because, unlike many rural towns, Bradford retains its rural character and small-town feeling but provides the amenities people want. It has a number of good schools, leisure centres and other facilities. The city has been investing in parks, roads and other infrastructure to attract both residents and potential employers. The goal is to create a complete community that meets every need residents have so they don’t need to leave. It would therefore support a range of housing types and price points, a variety of employment opportunities, all services and amenities they want.

The Hidden Potential of the Bradford Real Estate Market

There are a number of reasons for this. The abundant rural land makes it easy to buy up large areas to build tract homes or a new commercial facility. Farms in particular are being turned into upscale residential developments. The government is encouraging sales of residential development land and property to be developed commercially. They are doing this so that the town can hit their target of 50,000 residents by 2031. It is certainly moving away from its history as an agricultural regional hub and toward the future of a city in its own right.

The Best Reasons to Invest in Bradford, Real Estate

The Toronto and Vancouver real estate markets have been so overheated that the Canadian government tightened mortgage rules to slow down the growth of real estate prices in these two cities. One change was the mandate to perform a stress test for every borrower, ensuring they could afford their mortgage if interest rates went up. Another change was the near elimination of loans intended to raise the down payment for a property. On top of all this, CMHC insured mortgages had to have a maximum price or improved value below a million dollars. Home buyers and businesses have coped by seeking out more affordable real estate markets. 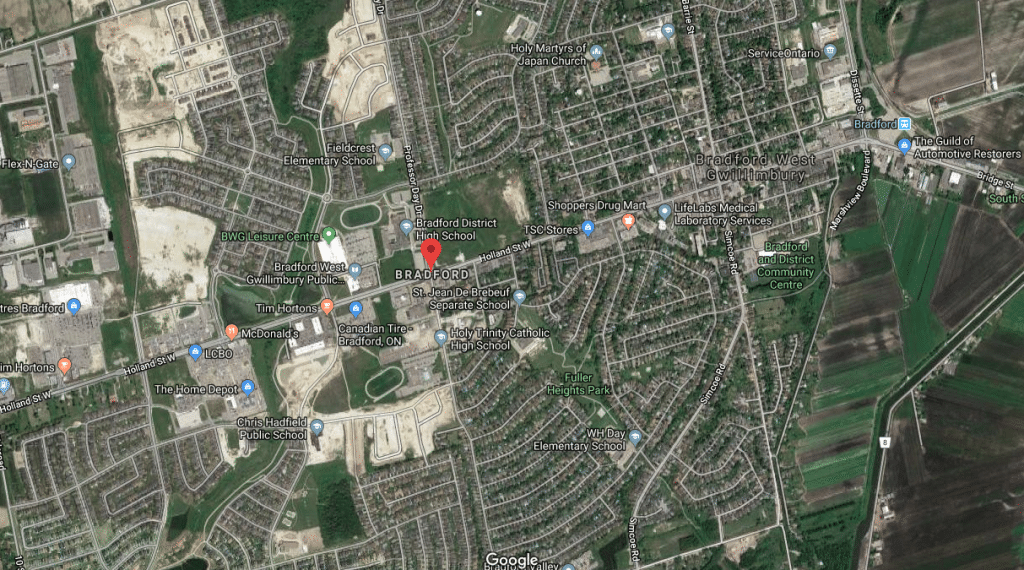 The biggest demographic change in the Greater Toronto Area has been the filling in of areas between cities, suburbs and towns to create one giant metropolitan area. Those rural areas that are too far to commute to Toronto or another major city are emptying. However, because many people want to live on a large piece of land or feel like they’re in a small town, communities like Bradford are growing quickly. They’re more likely to commute to Vaughan than downtown Toronto, but in a landscape where the only shift is towards greater density. Nor is Bradford unique in this regard. All of the northern suburbs of Toronto are being nicknamed “Boombergs” because of this rapid transformation from rural to urban. It is all becoming, as one reporter called it, an edgeless city.

Bradford is facilitating this by expanding infrastructure so that new commercial, industrial and residential real estate can be built up quickly. Bradford is notably progressive, actively working with developers to create the community they want to see instead of reacting to the inexorable expansion of the Greater Toronto Area into their backyard. They want to encourage the growth of new employment opportunities in the area instead of building tract housing and leaving people to drive into downtown Toronto. They recognize the value of their highway lands and want to make them “investment ready”. The city of Bradford even provides assistance in site selection for interested businesses.

Slowly and deliberately developing all infrastructure simultaneously, creating both local housing and jobs at the same time, minimizes the chaos and confusion that comes with rapid growth. For example, it is easier to encourage new employment opportunities as the city expands than it is to convince employers to move into a bedroom community. It also provides the tax revenue required for expanding recreational offerings and services for the community. Bradford’s new multi-use park and leisure centre are examples of this. The positive feedback loop will make Bradford a great place to live, work and play for years to come.